My last blog looked at how U.S. federal government outlays were distributed in 2015 – one of the few situations I’ve found where a pie chart actually works! But taking a deeper look at the issue, and especially considering federal spending trends over time, we’ll see that pie charts are severely limited. We need a better presentation approach, and in the process we’ll come face-to-face with the limitations of data visualization.

To refresh your memory, here’s the pie chart we looked at last week: 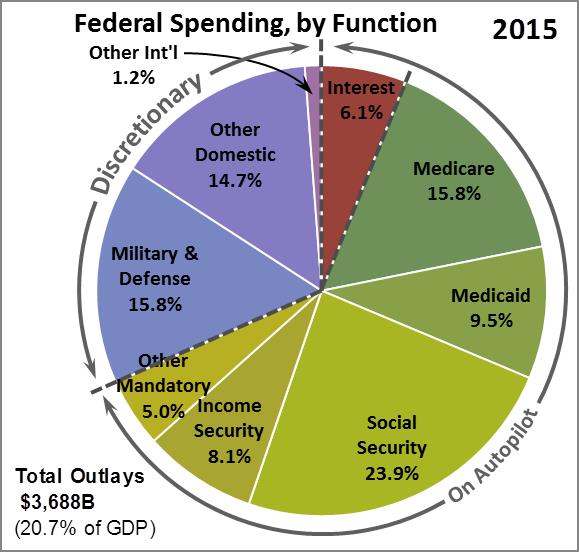 In a single image, we see that less than one-third of federal spending is “discretionary” – that is, money that can be controlled by Congress in the annual appropriations process. The other two-thirds or more is “mandatory” spending – which can’t be changed without passing new laws – plus interest on the national debt, which can’t be ignored.

But a snapshot of a single year has virtually no meaning. Just as with an enterprise’s financial statements, numbers mean nothing unless they can be compared to something else – over time, vs. budget, vs. competitors, etc. Here, let’s look at federal spending over time – have things gotten worse or better? So sticking with the pie chart motif, here’s a look at federal spending at ten-year intervals: 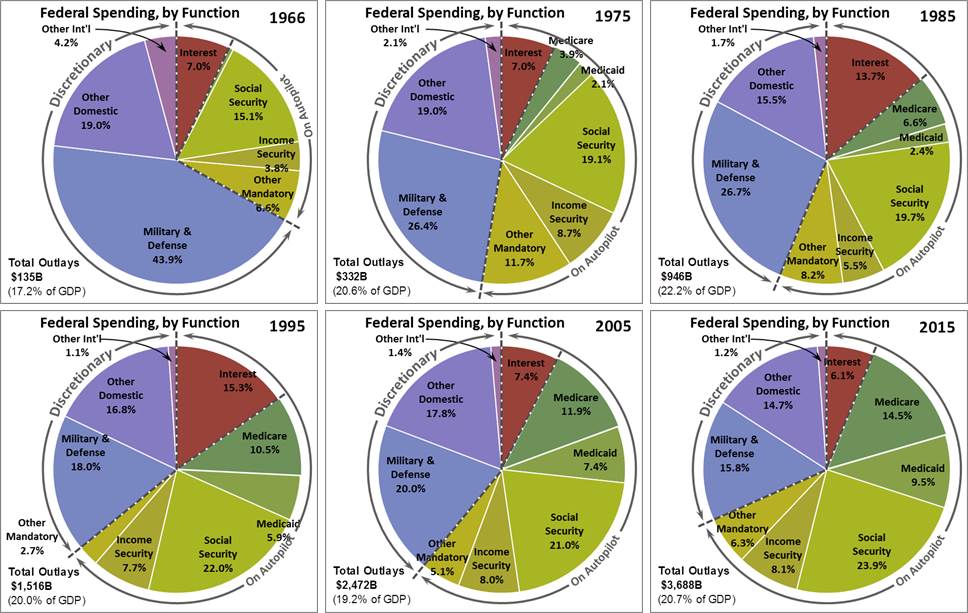 This visual tells us that…

Do you like this presentation? I don’t, and I’m the author! It was a lot of work, including much fiddling with colors, text placement, and added artwork. Even so, it has some fatal problems:

This illustrates the inherent limitations of the pie chart. Don’t use a pie chart unless you want to present only one or two data points, and you’re willing to use an entire page or screen to present it/them. And never try to present a trend or a pattern by showing side-by-side pie charts.

There are many better ways to illustrate Uncle Sam’s spending trend. Here’s an example:

This is a “Stacked Area Chart” (as it’s called in Excel), where the total height of the graph at each year stays constant at 100%. I like this choice of chart type because of the notion of a “river” of spending that is both visual and metaphorical. Most important, I’ve kept the same order of the Data Series (i.e., Interest, Medicare, Medicaid, etc.) and the same color scheme that you saw in last week’s pie chart. As a result, even though there are some ebbs and flows in federal spending, here are the trends that we can easily pick up from the above graph:

In other words, we can learn much more from a well-conceived graph than we can learn from a dumb ol’ pie chart.

As a final, subtler observation about the Area Chart, note that it’s a lot easier to see how the discretionary (bluish) sector has changed over the 50 years than the mandatory (greenish) sector. That’s because the bluish area is “anchored” by a straight line along the top, while the greenish are sits on top the Interest data (the reddish area), which has had some ebbs and flows – remember that interest on the national debt is affected not just by the size of the debt, but by interest rates… which are at historic lows right now. We can fix this perceptual issue by moving the Interest data series upward to sit in between the discretionary and the mandatory areas. Now the greenish area is also “anchored,” by the straight line along the bottom, and we can get a clearer visual impression of how mandatory spending has changed over the 50 years:

The point of this exercise is not just to try to give people a better sense of how Uncle Sam spends your tax dollars – which I hope we’ve accomplished here – but to show that small, seemingly unimportant changes in the way we lay out the information on the page or screen can have a huge impact on how effectively the most important points get made.

If you are in FP&A, technical writing, or any other discipline where presenting numbers is critical to your professional success and effectiveness, think carefully about whether your tables and graphs are actually getting your point across. In a future post, we’ll take a further look at using data visualization to understand federal government spending, and we’ll get even more insights into the limitations of data visualization.